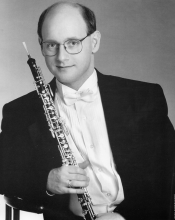 Dan Williams is one of Seattle's most sought-after performers, as soloist, orchestral musician, teacher and recording artist. He served as principal oboist of the Honolulu Symphony Orchestra in its 1992-93 season and previously held the same positions in the Harrisburg (PA) and Binghamton (NY) Symphonies. He has also played principal oboe with the Seattle Symphony, the Seattle Opera, and the Pacific Northwest Ballet. Of his 1996 performance of Bach's Double Concerto with Joseph Silverstein and the Northwest Chamber Orchestra, the Seattle Times reported that "oboist Dan Williams poured out waves of beautiful tone with considerable musicality". In a 1999 review of the Vaughan-Williams Oboe concerto, the Bellingham Herald described Williams as "a consummate player, in easy command of those subtle shades of color and phrase that can let the oboe approach the expressive range of the human voice. It was a performance to melt your heart".

A native of Seattle, Dan Williams received his musical training at the Juilliard School and at Western Washington University, where he was voted most Outstanding Graduate by the music faculty.